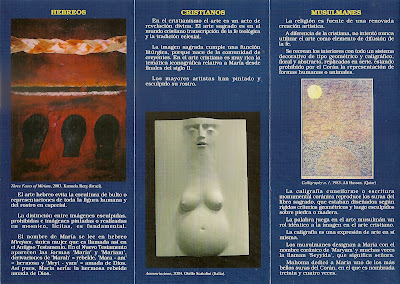 For the 5th Biennale D'Arte Sacra, artists from the three major religions were invited to express their artistic interpretation of the subject: "The Three Faces of Miriam".

Karmela Berg's aesthetic vision, as seen through the experience of contemporary Italian art, is firmly rooted in the Trans-Avantgarde movement, with specific references to artists such as Sandro China and Mimmo Paladino. Berg's works are not descriptive, but synthetic. Through a process of subtraction, her human figures are often reduced to the contours of the head, while the diversity of human types is expressed through subtle chromatic variations and a divergent treatment of space, highlighting each figure's unique identity as well as the objective diversity of the group. Side by side with this humanity, is the inclusion of fundamental symbolic forms: the ladder, the earth, the sky, the braid. All is stitched together anew. These images suggest the union between various elements and are meant by the artist to serve as a bridge across human differences. The color range gives priority to earth tones and shades, highlighting the earthly element of this work's universal message.

Translated from French by Yael Shneerson.

For the 6th Biennale D'Arte Sacra, artists from the three major religions were invited to express their artistic interpretation of the subject: "Angels".

In Jewish mythology, the angels were celestial, semi-divine creatures that populated the upper worlds, the hosts of heaven that filled the firmaments around God. They played different roles, performed godly missions, and were entrusted with various divine powers. As the direct divine presence lessened, the angels performed gradually increasing roles, emerging in mediation positions, interceding between God and man.

Some say that the angels are the sons of God. Others have it that they were created by and subjected to God, and the syllable "el" (=God) in their names – e.g. Michael, Gabriel – indicates His mastery over them.

In order to regulate the angelic world, God created the archangels who governed all other angels. Michael was appointed chief of the virtuous; Uriel reigned over the universe and heavenly bodies as regent of the sun, the moon and the stars, and presider over the underworld (Sheol, Hades); Raphael was entrusted with human souls and with healing disease; Gabriel ruled the Garden of Eden; Peniel was entrusted with repentance; and so on and so forth. Numerous holy angels and cherubs were also created, whose role was to surround God and magnify his glory: angels of peace and angels of compassion, as well as angels of fury and destruction, whose place of residence was far-removed from the Lord. The good angels were also called angels of servitude and they accompanied the righteous, protected the God-fearing, and punished the evil.

Angels were usually winged, but when they operated in God's missions in the world, they often assumed human form. Some performed their mission clandestinely, others gained fame.

The first encounter between angels and man occurred when Adam was given the Book of the Heavens which contained the secrets of the universe and mankind and was to be handed over to the next generations. The angels brought Avraham the tidings of the birth of his son, Isaac. Angels warned Lot to flee before the destruction of Sodom and Gomorrah, and when the men of Sodom compassed Lot's house, the angels saved Lot from the assault by temporarily blinding the mob.

Angels usually emerged in times of fateful changes in the life of the individual or the collective. An angel appeared to Abraham, preventing him from sacrificing Isaac. Angels appeared in Jacob's life on several occasions: in the dream of a ladder set up on the earth, whose top reached to heaven, with angels of God ascending and descending on it. On another occasion, Jacob wrestled with an angel in human form all night, and the angel failed to prevail, but only inflicted him with an injury in the hollow of his thigh; some say the angel guarded Jacob until his death.
Archangel Michael appeared to Moses in the burning bush, and only then did God himself speak to him. When the Egyptians chased the Israelites and they went into the Red Sea, it is told that five spectacular men appeared riding horses out of the sky, shooting arrows and lightning at the Egyptians. When the Israelites escaped from Pharaoh's troops in the desert, an angel moved before and behind the camp, accompanying and protecting them throughout the entire journey in the desert. During the Revelation at Sinai too, when God descended upon the mountain, twenty thousand chariots with angels of servitude descended with him.

A man with a drawn sword appeared to Joshua, who asked him whether he was a friend or a foe; the man did not answer, but gave instructions and advice for the conquest of Jericho. Similarly, an angel of the Lord appeared to Gideon, commanding him to deliver Israel from the Midianites. During the Kings period, the number of angelic apparitions declined. In Ahab's time prophet Elijah fled to the desert, seeking death, but an angel encouraged him and gave him food and strength to walk forty days and nights to Mount Horeb – the mountain of God. Elijah is the last human being to have encountered an angel face to face in wakefulness.

In the Prophets' visions angels once again multiply. Seraphs appeared to Isaiah standing above God's throne, with six wings each, covering their faces with their wings and singing out loud the praise of God. The angels appeared as wheels of God's divine Chariot to Ezekiel, while Haggai himself was described as an angel. An angel spoke from within Zechariah's body and solved prophetic riddles, and angels rescued Daniel from the lions' den.

Angelic activity during the time of our Sages was somewhat different. Just as Torah scholars engaged in learning and in terrestrial, corporeal judgments, so the angels sat as an angelic host in the celestial court, taking part in divine judgment. Their status was diminished, and it was said that the people of Israel are closer to the Creator than the angels, for they keep the Commandments while the angels do not. Rabbi Akiva doubted the angels divinity too.

Maimonides held that the angels are ranked according to their knowledge and closeness to God. Ashkenazi Hasidim in Jewish communities on the Rhine in the 12th century described an angel world divided into two: in the lower order dwelled the "appointed" or "fate" angels, inferior angels that carried out the various decrees and were specifically responsible for every person, creature, and nation. Above them dwelled the higher order angels who took part in the Merkavah world surrounding the throne of God. The 13th century Kabbalists used to say that man surpasses the angels in his constitution, and that the soul was hewn from the very purity of divine emanation (Atzilut), which is loftier than the angelic substance. The angels appeared once again to the Kabbalists, as they did to the Midrash compilers: as angels of mercy and angels of judgment, angels of servitude serving the aspect of sanctity, and angels of destruction serving the world of impurity.

The angels were created of divine light on the first day before all other creatures, and are immortal. They are made of the celestial elements: compassion, power, beauty, and authority, which correspond with the corporeal elements of water, fire, air, and earth. They are not corporeal, but their form is human, and in this they differ from the demons. Angels appeared in human form, having assumed a corporeal body. Rabbi Yisrael Baal Shem Tov had it that angels and demons accompanied him wherever he went. But there were also angels that appeared only in spirit, based on the wisdom of the observing man.

The modern era did not do favor with the angels. The rationalist Jewish scholars, both orthodox and secular, generally underestimated the status and significance of various companions of God. One of the last angels reported was the angel of history described by Walter Benjamin who identified him in a painting by Paul Klee (Angelus Novus): the angel standing there looks back in horror, his eyes are staring, his mouth is wide open, and his wings are spread. The storm is so strong that it irresistibly propels him into the future to which his back is turned. This storm, says Benjamin, is what we call progress.

Zoom in on Art Projects